There is a cafe in Barcelona, Spain known as “The Four Cats” which has a rich history, excellent food and a very pleasant ambiance – I highly recommend it if you are in the city.  It also has almost nothing to do with wargaming.  Or does it?  Picasso, the artist, was a famous resident of Barcelona and Els Quatre Gats was one of his frequent haunts.  He would often meet other artists, musicians, novelists, or other minor celebrities of the day at the cafe and discuss everything from art to poetry to politics.  If one sits in the cafe one can almost hear the echoes of the laughter or the shouting as they debate their favorite portrait or novel.

I got to thinking about these seemingly random connections the other day when I was reading Red Star Over the Pacific, by T. Yoshihara and J. Holmes.  Their research explores the inner workings of modern Chinese naval strategy and theory.  Their central premise seems to be that the Peoples Liberation Army Navy (PLAN) is chiefly influenced as much by Alfred Thayer Mahan as it is by Mao Zedong.  An interesting concept.  What if Mahan and Mao could meet for coffee and discuss naval strategy?  I haven’t finished the book yet but it has made me rethink some of what I thought I knew.  [The link will take you to the condensed version published in an Australian Defence journal.]

All of this prelude is to get us to the main point of the post, the PLAN navy.  In my last post I discussed my ongoing difficulty with ordering GHQ ships via Grandiosity and unfortunately there is still no resolution there.  I do however have something to share in the form of pictures of the GHQ Jiangwei II I ordered directly from GHQ.

As with all of GHQ’s models this one is highly detailed and the limited assembly required was very easy to accomplish.  The one small disappointment however was the slight offset in the alignment of the two halves of the mold.  This produced a small but noticeable seam-line on the model, more than just flash.  This misalignment was more than I would have expected in a brand new model.  I should also note that the misalignment was present on both ships that I purchased.  One was affected more on its ports side while the other was more affected on its starboard side.  With some judicious filing however both seams were removed. 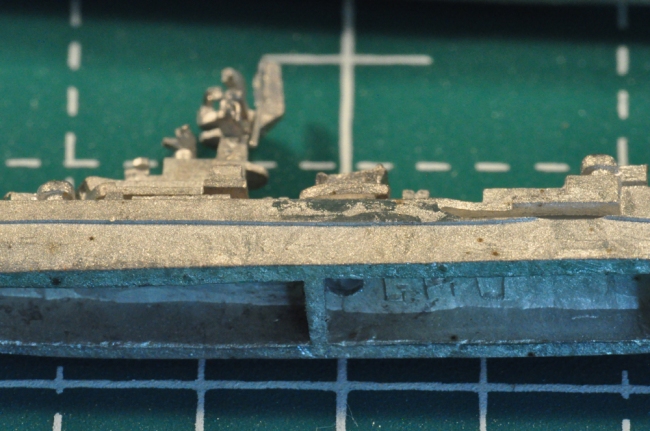 The other good news coming from GHQ is the announcement of their almost complete 2013-2014 product line.  They’re still holding out on a November surprise but the rest of the list looks pretty good.  In addition to the USN LCS I mentioned previously they are going to produce a few more modern naval units all of which will be in the PRC line.  The first up will be the Type 053H1G Jianghu V which seems like a solid choice.  The second unit will be the Project 956EM Sovremenny which saves me a lot of conversion work and makes me very happy.  The last unit will be the Type 051DT Luda IV.  I think all of these are great choices and they don’t overlap the offerings from Viking Forge.  With the previous PLAN ships and Arleigh Burke Flight IIA model released last year there is a growing opportunity to get some ships on the table and play out some Pacific scenarios.  Now if they would just make some new JMSDF and S. Korean vessels as well.