For those who frequent the GHQ military models forum you may recall that last September I posted a bit about some F-86 decals from Scale Specialties.  This is an update to that post.  To start with I purchased a pair GHQ F-86A-5 (GHQ stock # AC80).  I have my doubts that they are actually the -5 version but my reference library is in storage so I’ll table that discussion for the time being.  The models themselves are of the same excellent quality expected of GHQ.  One of the models had some minor pitting on the fuselage near the leading edge of the wings but it is barely noticeable at arms length.  You can see in the close-up view below that the mold lines were another area where I had to use an X-Acto knife to smooth it out a bit.  Here are the models after adding magnets and priming.  One word of caution, if you intend to place decals on the underside of the wings glue the drop tanks on as the final step. 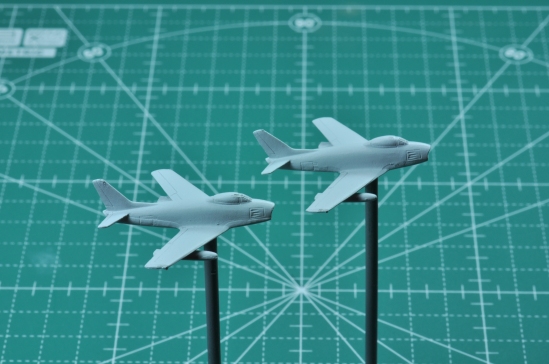 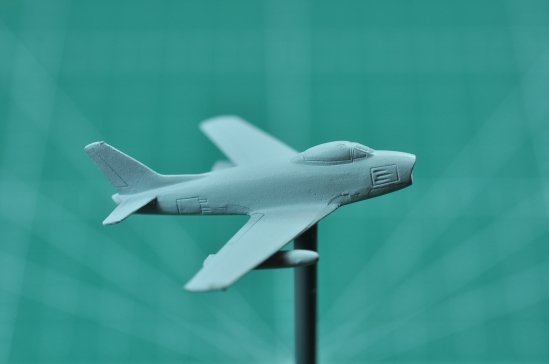 My original intent for these models was to paint them in Pakistan Air Force (PAF) colors for the ’65 war with India and to a lesser degree ’71 war.  I also intend to pick up a couple of the Raiden F-86 models for comparison.  In the end though I changed my mind and opted for a Korean War USAF F-86 instead due in large part to the Scale Specialties decals I found while looking for something else.  The company offers three sets of decals for Korean War Sabres.  The first pack represent the 4th Fighter Interceptor Wing from 1950-51.  At that time Sabres were flying with black and whit ID stripes on the fuselage and wings.  The second pack, which is the one I selected, represents the 4th Fighter Interceptor Wing during the period from 1951-53.  This pack has the familiar yellow bands which replaced the earlier black and white strips.  The final pack represents the 51st Fighter Wing during the same ’51-’53 time frame.  A very cool feature of these packs is the second decal sheet which includes distinctive nose or fuselage art which was carried by several aces in those wings.  In fact the decal sheet for the 51st Fighter Wing has a very cool dragon which goes on the fuselage that tempts me to buy another pair of Sabres.  In both packs the appropriate tail numbers are also included which allows you to make a very accurate model of that ace’s aircraft.  The downside is that the decals are specific to those aircraft.  Some purists might not like having to mix squadrons and wings when gaming with formations of more than two aircraft.  If that sort of thing does bother you I-94 Enterprises has good decals which are a little more generic in nature.

After priming I airbrushed the aircraft with Humbrol Chrome Silver #191.  In hindsight I should have used some kind of sealant over the silver.  With all the handling required for the decals the paint around the nose of the aircraft has worn off which will require a touch-up by hand.  I probably could have also worn latex gloves to prevent it as well.  Here are the models after painting and having some of the yellow bands applied. 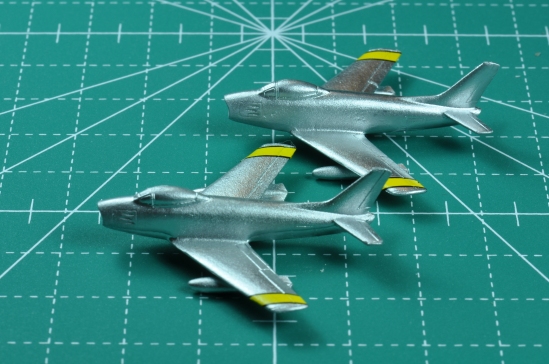 I should mention here that I am a big fan of the Microscale Industries Decal System.  I think their products do a wonderful job of really making the decals smooth onto the model presenting a appearance much closer to reality that other systems. 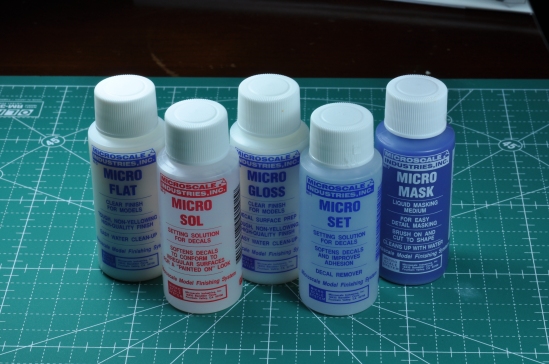 Micro-Sol softens the decal film which enables it to conform to the detail lines of the model.  An obvious hazard of using this is the softened decals can be ruined if handled during the drying process.  Unfortunately, I had this happen to this model when applying the yellow band on the vertical stabilizer.  As you can see here the aircraft number is mangled.  I briefly considered stripping the decals and starting over but I liked the artwork so much I decided to go on. 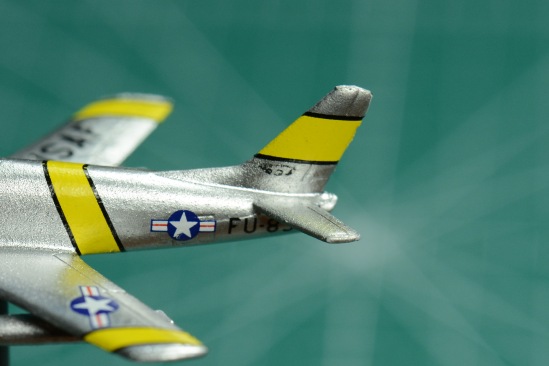 I handled the model too soon after applying Micro-Sol and ruined the aircraft number on this side.

Here is the aircraft with wing and fin flashes, rounders, aircraft numbers, and “USAF” decals. 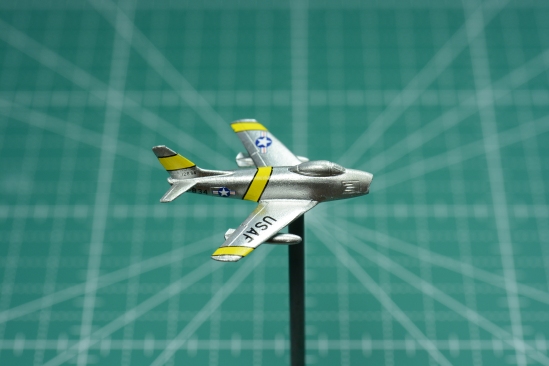 Here are the aircraft with their full complement of decals.  All that remains is applying a protective coat and painting the canopies, intakes, and tailpipes.  All thins considered I think they came out very well.  If I had it to do over again there are things I would change but that is what learning is all about. 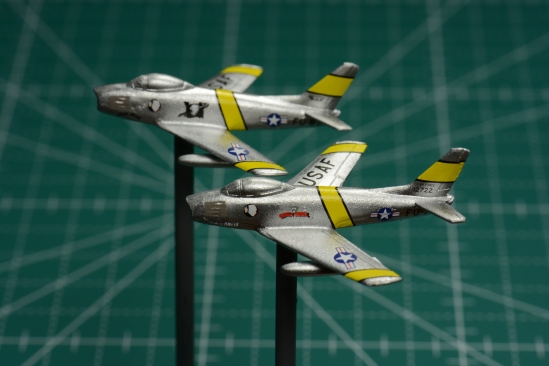 The decal process is complete. All that remains is painting the final details.