In an effort to maintain some balance and clear out the backlog of projects gathering dust in my workroom I finished up a couple of pieces that Ive mentioned on these pages before. First off is the pair of Israeli F-16A’s from GHQ. The models are the same high quality you can expect from GHQ but I’m not completely satisfied with my color mixes, or for that matter the application. At arm’s length their fine, at least for gaming purposes. I need to use an airbrush in the future. 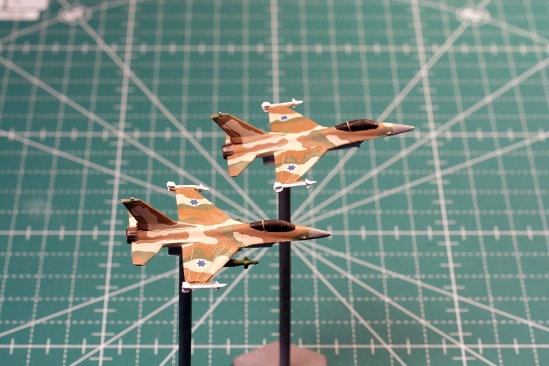 Still on the workbench are a gaggle of aircraft from GHQ and Raiden Miniatures, now a part of I-94 Enterprises. Most of these will go towards my AIW collection. Not appearing in these photos are a pair of GHQ AH-7 Lynx still waiting to be primed. 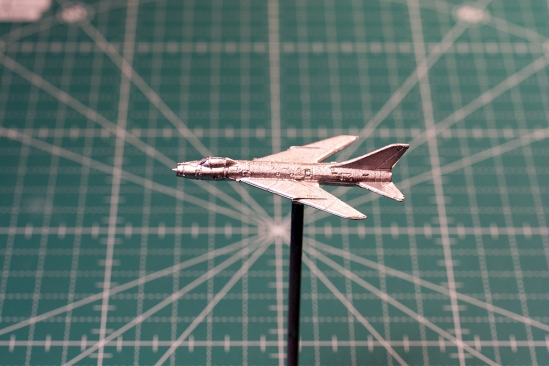 I thought I might take a moment and shift away from naval matters for a while and go back to micro armor. In this case it is really about aircraft for micro armor. I painted up a couple of F-16s from GHQ in Israeli Air Force colors. If you recall one of my first posts was a pair of Super Mysteres and Skyhawks from Raiden Miniatures painted in IAF colors as well. I really liked the colors I mixed for those planes so I was a bit disheartened to see that the paints had dried out completely. Off to my local hobby shop, the Newport Hobby House, to get some new paints. They had most of what I was looking for but the pale green just didn’t come out pale enough to match the previous aircraft. I’m not going to strip them and start over but I will adjust the color before I paint the F-15s and additional Skyhawks I have sitting around. Anyway, here are the F-16s.

I’m definitely going to have to tinker around with the colors some more. While I was doing the research for the Skyhawks I came across an interesting modification done by the IAF to help defeat SA-7 and other IR homing missiles. They attached an exhaust extension to the engine tailpipe which caused the missiles homing in on the heat plume to proximity detonate too far away from the fuselage to cause much damage. I have a pair of aircraft that will be modded shortly. Here’s a picture from a plastic kit.

Some of you may remember the old fairy-tale about the Cobler and the elves.  For those that don’t remember (spoiler alert) elves come out at night to finish the work of the Cobler while he sleeps.  Lately that is how anything gets done around my house, at least any of the “geek stuff” that I want to do. I have to wait until the family is asleep and then the elves can get to work.  As you can imagine it doesn’t leave much time before they too get tired and have to go to sleep.

In that time however, I have been very active trying to convert my tanks with glued turrets into turrets with magnets.  I’ve detailed this process several times before so I won’t go over it again now. I’ve been converting essentially one company at a time so that on the off chance I actually get to play a game I can field a complete unit.  So far I have converted GHQ M1A2, M1A1, M60A3, M60A2, Leopard 2A6, Leopard 2A4, Leopard 1A4, Chieftain, Challenger, Challenger II, Merkava Mk IV, Merkava, Magach 3, Magach 6b GAL, Magach 7, M48, and M47 tanks. I have converted CinC M48G2 and Leopard 1A1 tanks as well. As you can see from the gallery I have also experimented with LAV and MRAP vehicles to see how small I could reasonably go. I absolutely love what the magnets can do. Unfortunately, now I have to go back and touch up the paint jobs. 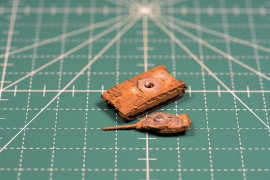 I still might try to use magnets on the turrets of my WWII battleships but I haven’t decided yet for sure.

Hard to believe I’ve been AWOL since March but that was when the world changed and I found out I was getting short fused tasking to move (again).  So everything gets packed up and shipped out.  If you’ve never moved overseas it takes a while for your things to arrive by ship…  a long while.  Which I guess is the origin of the phrase ‘a slow boat to China’…

That was, more or less, how one of my previous posts started. Short notice move, everything packed up, takes soooo long, yada, yada, yada. Once was bad but after only fifteen months or so in Italy we found out that yes it can happen twice. Well we’re here now (and so is my stuff), enjoying the beginning of a New England winter. The kids are settled into a chaotic routine so off to do stuff I like to do. I have a lot of catching up to do. Lots of ideas and right now lots of time.

This week I’m taking a step back from my own work to highlight some recent news in the hobby industry.  Admittedly it is a bit of a cop out but with Carnivale last weekend there wasn’t much time to do more.

First up is I-94 Enterprises, one of go to favorites for storage boxes and 1/285 scale aircraft.  You may recall that I’ve previously mentioned that Dave WInfree purchased Raiden MIniatures.  Their latest news release states that they’ve brought several models back into production. Most interesting to me are the Grumman F9F Cougar and the Gloster Javelin.  While neither aircraft saw real combat there were ‘what-if’ scenarios that could have resulted in combat engagements for the Javelin and they’re both cool looking aircraft.  During the early 1960’s Javelins were stationed in Singapore to support Commonwealth forces in the ‘Konfrontasi’ between the British Commonwealth and Indonesia over the creation of Malaysia.  Indonesia operated mostly Soviet aircraft designs it could be an interesting scenario for fans of early cold war kit.

Next item is an announcement from author and game designer Larry Bond. Here is their announcement:

Larry Bond and Chris Carlson are pleased to announce the formation of the Admiralty Trilogy Group, LLC, a Virginia limited liability corporation. The Admiralty Trilogy Group (ATG) are the exclusive publishers of the award-winning Admiralty Trilogy wargame system, games that span naval combat in the twentieth and twenty-first centuries. These include:
· Harpoon (1955 and later, up to current day)
· Command at Sea (1925 through World War II and up to 1955)
· Fear God and Dread Nought (1905 through World War I and up to 1925)
The new company will publish wargames in digital format, using the Internet to deliver quality products through the Wargame Vault. We have over twenty titles available for sale, and will be expaning the list in the coming days.
Our biannual newsletter, the Naval SITREP, will continue publication. Issues 14 (April 1998) through 47 (October 2014) are available for sale at The Wargame Vault. Content in earlier issues will be condensed and published in an upcoming product. Current subscriptions with Clash of Arms will be honored, but will not be renewed. Instead of a $21.00 subscription for three issues ($28 overseas), each new issue will be posed on The Wargame Vault for $3.00.
In addition to the Trilogy product line previously published by Clash of Arms, Inc., The AT Group will be expanding and improving the game system with new naval and land-based rules sets, all designed to work with the current system and enhance your gaming experience.
The AT Group can be reached either at our email, AdTrGroup@aol.com, or on our Facebook page.
Our webpage, AdmiraltyTrilogy.com, will be up soon. We hope you will come and visit.

For the uninitiated Larry is the techno-thriller author who is also the creator of the Harpoon naval wargame system.  While sometimes maligned by gamers as ‘too technical’ or ‘too complicated’ for casual gaming the system was used extensively,at least in the 80’s and 90’s, within the U.S. Navy to teach basic naval warfare concepts to officer candidates.  What began as a modern naval combat system has expanded and evolved through the other games of the Admiralty Trilogy to encompass all naval warfare from about 1900 to the present.  The Admiralty Trilogy staff have been ‘unifying’ all the underlying equations for damage, construction etc. across the entire spectrum.  Does it matter to the average gamer that the data sheet for their HMS Agamemnon battleship of 1906 is calculated on the same basis as their HMS Agamemnon minelayer of 1940 or their HMS Agamemnon nuclear powered submarine of the present day? Probably not.  For me however it is significant.  After all, haven’t you ever wanted to game out the Final Countdown attack where the Nimitz class carrier travels back to Dec 1941 and must decide whether to intercept the Japanese raid on Pearl Harbor.

I have struggled for several years to find just the right shade of gray?, green?, tan? for my modern IDF forces.  My Google-fu reveals scores of pictures from Al Gore’s internet depicting IDF vehicles in a wide array of colors.  It is difficult to account for differences in sun angle, unit location, or whether the vehicle was photographed on a parade ground or during an actual combat operation.  No clear winner as far as color goes. Strike One!

So… I move on to step two: check the fora.  The Miniatures Page, Arab Israeli Wars, GHQ, and four or five others were not much more help.  Lots of opinions but little consensus.  ‘It Depends’ was probably the most common response.  What year?  Which unit?  Which front?  Which operation?  Well at least the diversity of opinion matches the diversity of photographic evidence.  Strike Two!

There was one positive development out of all of that however.  Several forum members suggested hobby paint manufacturers, such as Life Color, that offer pre-mixed IDF colors for specific time periods.  Progress!

But here’s the thing.  When the Lord gives with one hand watch out he doesn’t smite you down with the other.  In spite of the fact that I live in Italy, where I’ve been told Life Color paints are made, I can’t easily get my hands on them. There are precious few hobby shops in my area and those I have managed to find don’t carry Life Color paint.  Damn!  And for the double whammy military postal rules seem to scare online stores away from shipping hobby paint to APO/FPO addresses.

All of that is pretty disappointing.  Maybe there is a hidden silver lining.  Given the fact that there are so many different opinions and so many different photos out there it is possible there isn’t one right way to do it.  Perfect!  I Can now use one of my favorite modeling approaches… TLAR (That Looks About Right)!

Here are my Namers and my Magachs (with turret magnets) in my own version of IDF gray/green/tan.  The white chevron decals are from GHQ and the white barrel stripe decals are from an unknown source. 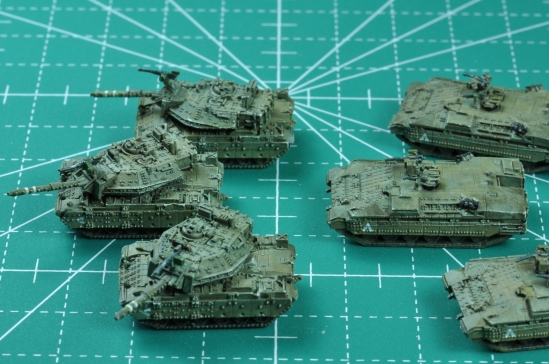 Just to show that it isn’t all naval all the time here’s an update on my IDF forces.  I picked up a pack of GHQ’s new release, the Magach 3.  As with most of their offerings I liked this one right off the bat.  I’ve always loved the classic M48 lines, the boat-hull bow, the beefy tracks and suspension, and the big cast turret that says ‘I dare you to knock this off’.  Yes, yes, I know that in actual combat they suffered from a number of serious flaws…  but they look so cool!

The rare earth magnets worked so well on the GHQ Magach 6b Gal that I put these models through the same process.  I made sure that they all had the same polar orientation this time.  Here are some shots of the process.

Underside of turret with turret pin. 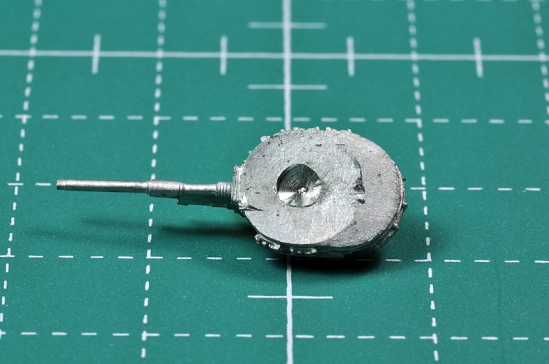 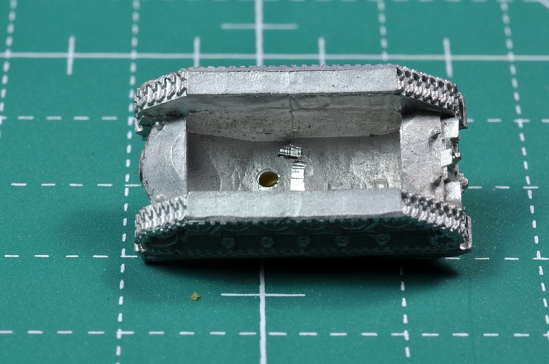 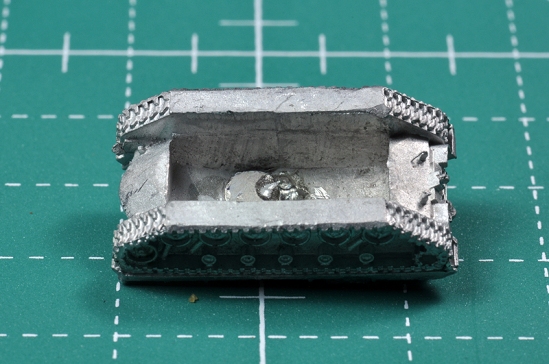 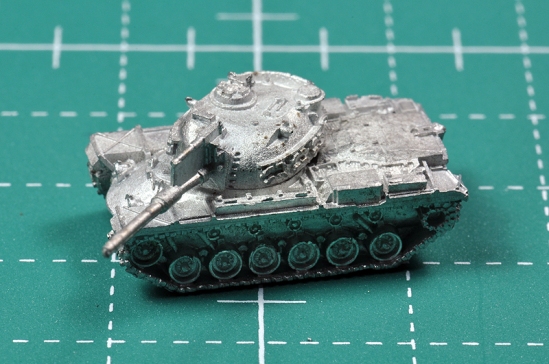 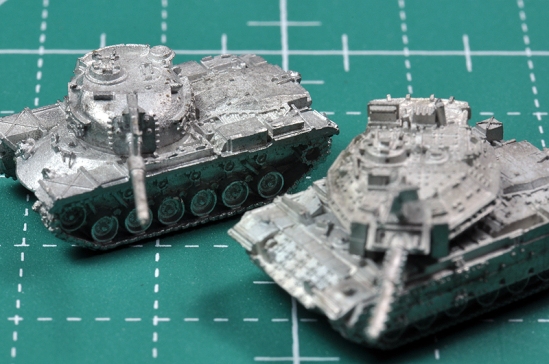 The Magach 3 and Magach 6b Gal side by side.

Now it is just a question of getting them primed and painted.