I thought I might take a moment and shift away from naval matters for a while and go back to micro armor. In this case it is really about aircraft for micro armor. I painted up a couple of F-16s from GHQ in Israeli Air Force colors. If you recall one of my first posts was a pair of Super Mysteres and Skyhawks from Raiden Miniatures painted in IAF colors as well. I really liked the colors I mixed for those planes so I was a bit disheartened to see that the paints had dried out completely. Off to my local hobby shop, the Newport Hobby House, to get some new paints. They had most of what I was looking for but the pale green just didn’t come out pale enough to match the previous aircraft. I’m not going to strip them and start over but I will adjust the color before I paint the F-15s and additional Skyhawks I have sitting around. Anyway, here are the F-16s. 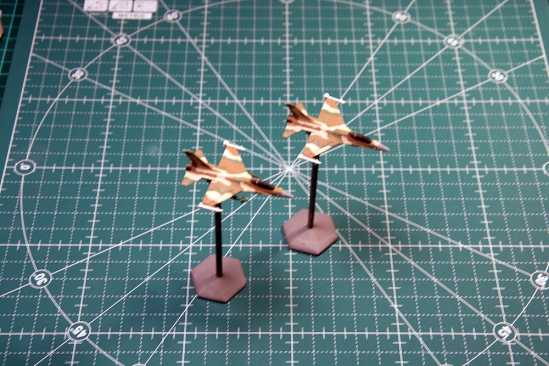 I’m definitely going to have to tinker around with the colors some more. While I was doing the research for the Skyhawks I came across an interesting modification done by the IAF to help defeat SA-7 and other IR homing missiles. They attached an exhaust extension to the engine tailpipe which caused the missiles homing in on the heat plume to proximity detonate too far away from the fuselage to cause much damage. I have a pair of aircraft that will be modded shortly. Here’s a picture from a plastic kit. 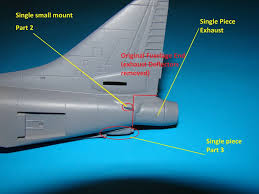 With a blog that is intended to feature wargame miniatures selecting the first photo can be daunting.  Is the focus correct?  Is the paint scheme correct and presentable?  I went through my Image Shack and Photobucket archives to find something, anything that might make readers want to come back.  The image I finally selected is a quartet of Israeli Air Force aircraft, two A-4 Skyhawks and two Super Mystere from Raiden Miniatures in 1/285 scale.