In a recent post I mentioned that I have undertaken a project to rehab my entire fleet of modern carriers and large deck amphibs. Some of the work is the result of damage incurred during my many moves while in the military. As a consequence of that I had to order a bunch of replacement parts from GHQ. Main masts, radar platforms, that sort of thing. My initial conversation with them left something to be desired. The worker answering the phone demonstrated little knowledge of their products or policies and suggested I write an email request instead. In truth, it sounded like she didn’t want to deal with my request and the sooner I was off the phone the better. Three weeks and two unanswered emails later I decided to call back. The phone was answered by a woman, I wouldn’t swear that it was the same woman but the voice sounded very similar, who was very helpful and carefully explained their special order policy. This is not the first time I’ve made special orders but I appreciate the reminder that sometimes they have to do additional cast runs to fulfill the orders and therefore it may take more time and would not be returnable. Fine with me. All of the special order parts are priced to reflect this extra work. I was shocked however to find out that each of the CVN deck decals would cost me $8. Ah, I’ll find another way.

One of the vitally important items to me was a replacement CIWS/NATO SS sponson that was missing from a CVN I purchased on ebay many years ago. At the time I shaped one out of styrene that was a reasonable approximation and it has served that purpose well. Here is what I’m talking about.

Hand Made Sponson for STBD Side CIWS/NATO SS on GHQ CVN-71 Model.

So on the phone and in email I described this piece as the sponson forward of the deck elevators that mounts the CIWS and NATO SS. A few days later I received an email telling me my order was almost ready to ship out but the worker who packages up the parts wanted some clarification of exactly what part I was talking about. Awesome, I thought, now I’m sure to get the right part. My response was that what I needed was “the smaller part that mounts on the right side forward of the deck elevators, not the long piece” in reference to her question about the long piece that attaches on the port side of the ship. What I should have done was taken a picture because I forgot something.

Yes, there is a sponson under the island, one between the elevators and the one I wanted forward of the elevators. If I had taken this picture then I could have saved myself $3 and received the part I really need. Instead I got this: 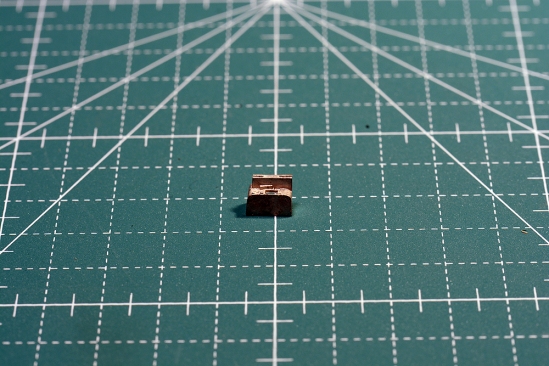 No refunds. And I do recognize that I bear some of the blame, this is not intended to be a total rant against GHQ. I thought I was clear but I wasn’t looking at the part sheet and I didn’t send a picture of the part I wanted during the email exchange I was having with them. They were looking at a part I had frankly forgotten even existed so we ended up talking past each other. Live and learn. I guess I’ll have to order another replacement once I get a future order together. In the meantime if you ever wondered what $62 buys you in spare parts from GHQ here it is. Seven mainmasts, four radar stanchions, four radars, and the wrong sponson. Sometimes you have to really want to do a restoration to pay those prices.

One response to “A Picture is Worth a Thousand Words or $3.00”